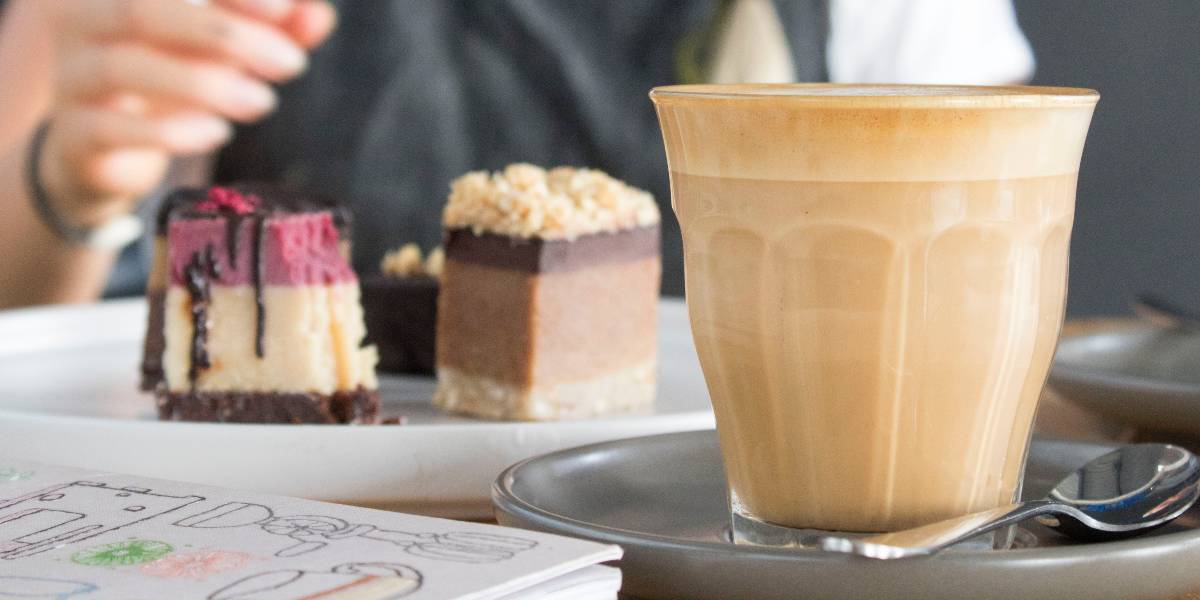 Are you ready to try a new coffee drink, improve your home-brewing skills, and save a bunch of money? Well, get ready cause we’re about to show you how to make a Starbucks flat white.

We’ve been big fans of this drink since Starbucks released it in 2015. We can do without the costly price, though! The good news is now you can make it at home for a fraction of the price and without any hassle.

So read on, we’ll show you all you need to know to add this new drink to your in-house coffee menu!

Here is what we’ll cover:

What is a flat white coffee?

To this day we still don’t know who to credit for creating this drink. Both Australians and New Zealanders claim they have invented it but the truth is we will never really know. One thing is for sure, this drink originated Down Under in the 1980s.

In Australia and New Zealand, a flat white is usually served in a 5-6 oz cup (150 – 180 ml) and has a single shot of espresso, steamed milk, and a thin layer of microfoam on top.

According to flat white coffee lore, it’s said that this drink came into being when many cafe-goers were asking for their cappuccinos “flat” or with much less foam. The baristas picked up on it right away and invented the flat white. The flat white gets its name from its thin layer of microfoam on top and milk content.

How does Starbucks make a flat white?

In 2015, Starbucks started serving flat white coffee drinks to its customers in the U.S. and Canada. Their recipe differs slightly from the original one in that instead of a single shot of espresso, they use two shots of ristretto.

The ristretto is a smaller version of an espresso known as a “restricted” shot. While a single shot of espresso is 1 oz (30 ml) the ristretto shot is about half an ounce (15 ml).

While both an espresso and a ristretto shot have about the same amount of caffeine the ristretto has less water and more flavor. Ristretto has a more concentrated and sweeter flavor than espresso, often making it a barista favorite.

If you order a flat white at Starbucks you will get a coffee with a double ristretto shot and smooth steamed milk, topped with a latte art dot. The Starbucks flat white comes in an 8 oz (235 ml) cup. This size is called “short” by Starbucks baristas, and you probably won’t see it on a Starbucks menu but that’s why we’re here, to let you in on all the secrets!

How do you make a Starbucks flat white copycat?

Learn how to make a flat white at home that tastes just like the one at Starbucks.
Print Recipe
Prep Time 5 mins
Total Time 5 mins
Course Drinks
Calories 120 kcal

Ingredients for a Starbucks flat white

A Starbucks flat white only has two ingredients:

The other characteristics of the Starbucks flat white are its velvety texture, a thin layer of foam, and the latte art dot on top. To get that texture, whole milk is the best.

Which plant-based milk is best for a Starbucks flat white?

We personally recommend plant-based alternatives with neutral flavors like soy milk or oat milk. By using one of these kinds of milk the subtle notes of your coffee will not be lost. Medium and dark roast coffees are well known for their chocolate and nut tastes so pairing them with oat or soy milk preserves those unique flavors.

If you choose almond milk or coconut milk you can expect to taste those flavors in your cup. While coconut milk will give your flat white a sweet and creamy coconutty taste, almond milk might make it taste a bit bitter at first. That bitterness goes away as you sip and the flat white ends up tasting like marzipan and coffee.

How do you make the original flat white coffee?

Like we mentioned in the beginning, the original flat white is served in a 6 oz (180 ml) cup and has a single shot of espresso, steamed milk, and a thin layer of microfoam on top. If you want to make the original recipe at home there are a couple of things you need to pay attention to.

The first is the shot of coffee. This flat white version has a single shot of espresso (1 oz or 30 ml) instead of two ristretto shots.

To recap, when making an original flat white:

Everything else is the same, so why not try your hand at making the original flat white beloved by our friends from Down Under?

Although these are two coffee drinks that look similar, a Starbucks flat white and a Starbucks latte are very different from each other.

While the flat white contains two shots of ristretto, the latte has a double shot of espresso.

This means that the latte has more caffeine and a more complex and intense coffee flavor. What’s more, a Starbucks latte is usually served in a Tall (12 oz or 355 ml) or a Grande (16 oz or 375 ml) cup. So it’s larger and contains more milk than a flat white.

A Starbucks latte is a richer coffee drink, perfect for those who love loads of milk with their espresso. A flat white is a lighter alternative for those who want a sweet espresso flavor and a creamy mouthfeel without a lot of milk.

For this drink, Starbucks replaces the whole milk with almond milk and adds three pumps of honey blend syrup.

It’s a delicious alternative for something non-dairy.

Here are a few other flat white alternatives you can order at Starbucks or make at home:

Add three pumps of pistachio syrup and replace whole milk with coconut milk. The combination of coconut and pistachio will take the flavor of your flat white to a whole new level!

Vanilla half and half flat white

Replace whole milk with half-and-half and add three pumps of sugar-free vanilla syrup. This is one of the creamiest flat whites of all!

Takeaways on making a Starbucks flat white at home

Get ready to impress your family and friends now that you know how to make the perfect Starbucks flat white copycat at home!

Remember, the secret is in the ristretto shots and the creamy microfoam on top. If you get stuck at any point, don’t hesitate to come back to this article for a homemade flat white refresher!